Dry stone walling projects come in all shapes and sizes.  The following two are a good illustration of this point.

With a big budget, four wallers, a garden designer, three landscapers, a labourer and a mini-digger: this was a big job.  Taking an existing garden with a steep drive, crumbling stone walls and established plants and shrubs, we had our work cut out.  Initial discussions between the clients, the designer and Stone Inspired led to an agreed design of 16 stairs in a long, sweeping curve bisecting three terraces/raised beds plus a terraced area on the other side of the drive. 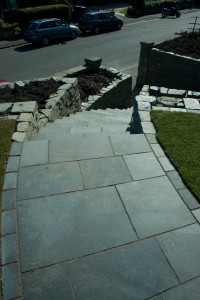 To start building we removed large amounts of material from the garden. We dismantled and sold 12 tonnes of existing stone. We also removed two skips of shrubs and tonnes of soil to create the terraces.

Then the building began…weeks of it!

Stone-wise we had nearly 30 tonnes delivered in 1/2 tonne bags.  Then there were the 50m² of slabs, the 10 tonnes of sand and the numerous bags of cement, new soil and compost.

Then there are the smal jobs that take a relatively short space of time to build but totally transform the clients gardens.

The play area that we built at the Olivebank Children’s Centre in Musselburgh only took 6 tonnes of stone, 1 tonne of sand, 4 bags of cement, 1 tonne of bark chips, 28m² of turf and two large plastic pipes by two of us in only 8  man days.  But the effect on the garden has been dramatic and the staff and especially the kids who attend the Centre are so excited with the finished job.

Sometimes the little jobs can be as dramatic as the big ones!

This garden had more than 60 tonnes of stone used to make it. 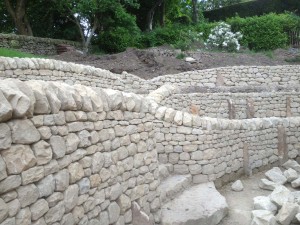 The brief was to construct a series of retaining walls to give some structure to the steep slope.  With such a steeply sloping garden and so many retaining walls, steps would be required to give access to the upper sections.  A bench was also asked for.

Within that vague brief the job came together; moving from a plan in my head to a detailed discussion with the client and the landscaper to finally making the stonework itself.

The whole job was a process of development. The garden coughed up tonnes of rough stone for backfilling, two very large slabs which were ideal as steps, and many monoliths too lovely not to use as part of the structure.