Some garden stonework jobs just grow and grow.  This is one such job…

The original aim was to take down and rebuild the old retaining wall in the client’s garden.  The picture below shows the wall  on our first day of work. The old wall was very dilapidated. 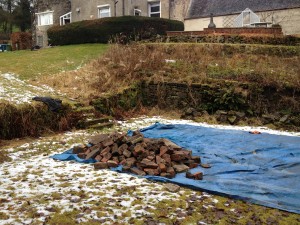 However, it had been a long time since I had priced the job, and for various reasons the job kept on getting put back, until finally in February this year I was able to start.  It would have been useful for me to re-read the work description before I started dismantling the garden!

Instead of just rebuilding the long section of retaining wall and fixing the steps, we ended up taking all of the garden stonework down.  We then discovered that the steps needed a total rebuild too. The job was growing arms and legs!

Meanwhile, the high earthen bank proved to be very unstable and many more tonnes of soil had to be removed to make it safe for working.  This resulted in the main wall having to be built higher than it was originally. And because the wall got higher, we needed to bring in even more stone!

After taking the steps out, the client asked if there was a way of getting the lawn-mower down the steps.  I came up with the design shown in the image gallery.  It is based on a traditional French design for getting wheel-barrows down steps that I saw a long time ago in Norman Haddow’s blog.  In my version I have two ramps for things like mowers and prams.

Although the job became much bigger than planned, I think the end result justified the extra work, even if the final bill didn’t quite meet either the client’s expectations or mine!  Some you win, some you lose…