To be honest, 2015 was a difficult year work-wise. 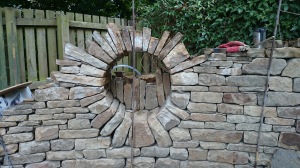 I was definitely spoiled in 2014 with some amazing projects: the Moongate water-feature, the Kirknewton and Dunbar benches and the Recessed Arch were some of the great projects I had.

Let me state from the beginning – I am always grateful for work.  I never take client’s for granted and I always do my best. Even when things don’t go to plan, I try my hardest to make it a good job of it.

Sometimes though I question why I do this as a career.

2015 turned into a year of dealing with a back injury; trying to build small walls with huge stone; making money out of two massive jobs that over-ran.  There was a certain repetition with much of the work involving low retaining walls. And for the first time since I started walling, I spent a lot of time chasing a client for payment. There were lots of lessons that I learned.

I’m glad the year is done.

Working through the back injury I suffered in late 2014 made the first few months difficult. It didn’t really stop me building but it did hurt a lot, especially when I was moving rocks about the place or digging.  Which is unfortunate because much of what I do involved moving rocks about and digging!

It set a tone for the year.

The first bit of the year – January and February 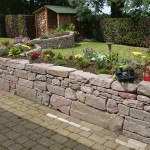 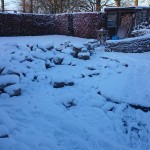 Snow in a garden

The first job required a rethink as the choice of stone was either tiny or massive and very little in between. So the client and I adjusted our parameters and we resorted to the Devil’s cream and concrete blocks to help with the build.  It made it happen and it still looks dry. You’d never have known unless I told you.  Which I have just done…  Anyway, they were pleased with the end result, which was the main thing.  With the second job using the same kind of stone, a hydraulic stone cropper was borrowed to cut the stones into more useable sizes. The things you have to do… 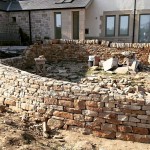 Progress on wall in West Lothian

Things got a bit better when I went back to complete the job I had started the previous year in West Lothian. The weather warmed up and the stone was nicer.  I had to make a huge number of copes and at times it seemed that progress was really slow.  Maybe that was a portent of things to come… 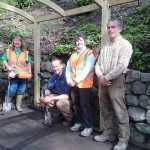 I did a few days training with the Alva Glen Heritage Trust in Clackmannanshire – it was fun doing the teaching rather than the building and we managed to make something of the incredibly gnarly stone.

I even had to deal with some vandalism too.  It all made for a fun few days. 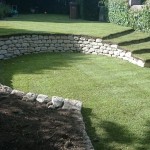 In May I built the stone work in a garden in Edinburgh where the brief from the husband was for a dry stone sunken garden; and from the wife was to not see the stone.  A bit of a challenge… But the best thing was that I came in after they’d already paid a prominent garden designer a lot of money for a design that they hated.  Clearly my design process of arm-waving; pointing at different parts of the garden and the production of a 15 min pencil sketch won them over. And I made a garden that they liked.  Steven Rowe and Bruce Murrish from SR Landscaping laid the turf and gave me encouragement. 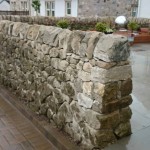 New copes on an older wall

Later in May I spent some time putting copes onto a wall I made a couple of years previously.  I had originally had a turf top but they’d later decided that they preferred a stone cope.  It was a strange experience reworking the wall and was not helped by the quarry delivering some huge stones, that whilst cope shaped, were not cope sized.  It took a lot of bashing to render them down.  Massive stone job No.3 of the year.

June was a strange month.  A month of firsts: the first job I’ve started and had to walk away from; the first rockery I’ve built and the first time chasing a client for payment. 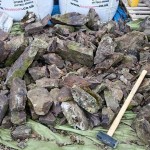 It started promisingly enough.  I am pretty confident that I can build with anything but the stone I had provided for me was terrible.  Worse I was continuing on from another waller who’d started and walked away from the job.  Trying to match someone else’s style is difficult. It should have been a warning to me to walk away from the project. Instead I took it on.  I tried; couldn’t work the stone; and after a week of frustration had to say I couldn’t build with it.  Not a good start to the month.  Suddenly I was without work. 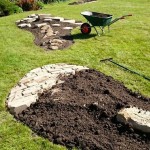 Thankfully my Kirknewton clients offered me the chance to build some rockeries with the stone left over from the previous work in 2014.

It was good fun building something different. 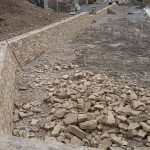 Just when I was wondering what I was going to do next, I got a call from a guy asking me about building 60m2 of facing stone work – to look dry from the front and mortared at the back.

The work itself was straight-forward, if a bit repetitive.  And I was really grateful for the work – it came at a very opportune time.  Maybe I slightly lowered the price to get the work and maybe I over-estimated how much I could do. But I definitely struggled to make money.

After getting the go ahead, the client suddenly did a disappearing act. I hardly saw him on site.  He’d promise to come and check out the progress and not turn up.  The job got bigger with a couple of wee additions added to the job – all with the promise that I’d get more to cover it.  But when it came time to settle up the balance, I went through a process of waiting; silence; promises of payment; flannel; lies and finally unhappiness at the build (despite me asking a dozen times for a site visit to approve the work). Eventually I got paid. 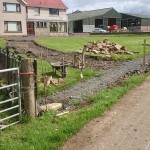 The first day on the job 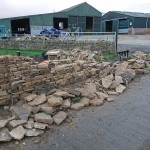 So, onto July and the job that would pretty much occupy me for the rest of the year.

I’d been to see the clients in March and we’d discussed a new bell-mouth entrance and boundary walls.  It was a decent-sized job, and although it was more than an hour from my house,I didn’t think that the commute was too bad.

I’ve built a lot of jobs with Alston stone over the past couple of years, and I was keen to try something different.  As the clients’ wanted a flat-bedded buff sandstone, I suggested using Dead Friars stone from Dunhouse Quarry.  I’d seen pictures of their stone about a year earlier and thought it was a good alternative.  I even went down to Co. Durham to check out the stone before confirming it.   So despite the client’s preference for Alston stone, we agreed to go with the Dead Friars. 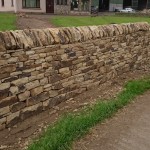 From the first stone I used, I realised that I’d made a mistake.  The stone turned out to be terrible to use.  Full of hidden fractures that caused awkward breaks when hit; loads of massive stones that exploded when hit with a sledge-hammer and tonnes of dross that were no use for building with. Consequently, the proportion of wastage was far more than planned.  We needed more stone than quoted for, which added significantly to the cost. And my build rates were way out. So the stress started in the first week… 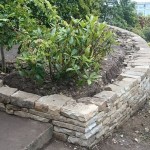 Anyway, in the midst of trying to work-out how to build with the Dead Friars stone, I took a week or so out and headed to Glasgow to build yet another low retaining wall. This time with some lovely Alston stone, just to remind me what I was missing!

The job in Fife continued on for the rest of August.

I had a busman’s holiday to the USA and Canada in September, before it was back to Fife. 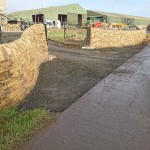 By now I had a worked out a rough plan of action to work with the stone, but it was going desperately slowly. Having put aside a lot of big stone that I was scared to try and break for fear of it exploding, I was able to borrow a hydraulic cropper for the duration of the job. Although this required a lot of my time, I was able to prepare tonnes of stone for building.

And just as I was getting toward the last few metres of work, my commute to work was severely disrupted with the sudden closure of the Forth Road Bridge due to a defect.  I was already coping with the long drives and short winter days. Now the road closure diversions added at least an hour each way to my journey. 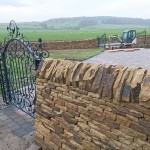 The last month was a real slog. But with some extra help for the last wee bit, the job was completed before Christmas.

However, in one bitter end to the year, my next client cancelled their project. I was due to start between Christmas and New Year on a job four miles away. Sigh.