After finally finishing the big job in Edinburgh in June, I spent the following three months getting stuck into three fairly decent sized jobs – and doing lots of miles of driving. I shouldn’t complain as it’s good to be busy. 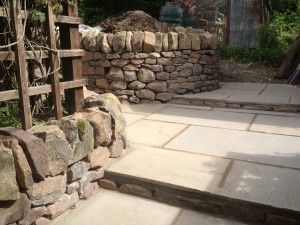 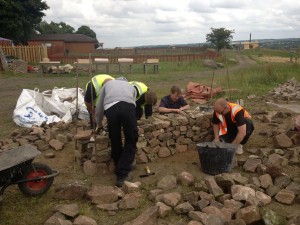 Cloybank dry stone walling training course
I spent an interesting couple of days in July teaching trainees at the Cloybank Estate. Cloybank offers building training to the long-term unemployed in the Falkirk area. Although the stone was quite challenging, it was great to see the improvement in quality over the two days. 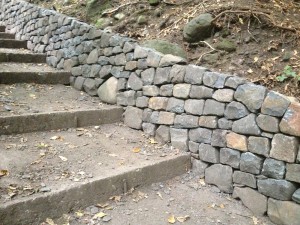 The long section up the staircase was fun to build, although very labour intensive moving the stone! 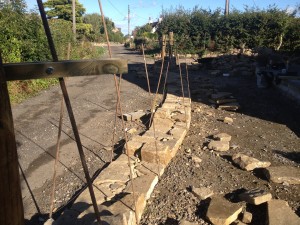 Fife – turf-topped free-standing wall
September saw me start work on another large project – this one was 20 metres of free-standing wall. The brief was to make the wall “interesting” – after lots of discussion and chat, we decided to build a long curved section of wall that started high, dipped in the middle and finished high.  And topped with turf.

It was such a complicated shape, especially building a nine metre long, shallow curve in the middle section – the change in height also means the base width changes too – keeping the batter consistent was very difficult.  I learned a lot about building curves with this job! 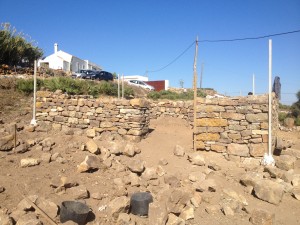 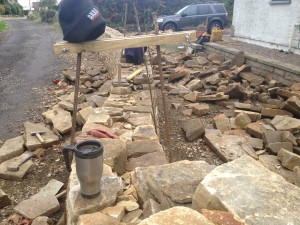 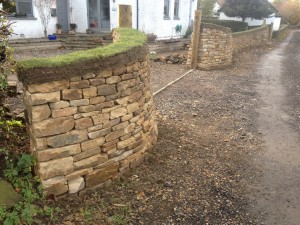 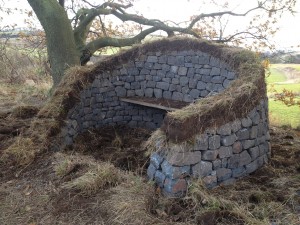 Using stone left over from the job in Alva, I built this bench/shelter near to Kinghorn Loch. The seat is made from a large piece of larch and the top was made using thick turf dug from the base of the stone work. This was part of a community project to enhance access to a right-of-way.

The last completed job of 2012 involved facing the old and shabby brick walls in this Edinburgh garden.  I had to use mortar (Devil’s cream) to bind the stonework together given the narrowness of the stonework.  However, it was hidden as much as practicable to give the impression of dry stone walling.

In the front garden I took down and rebuilt two sets of ancient and crumbling dry stone terraces.  The rotten stone was removed and replaced with new Alston stone.  Nothing was wasted though, as the old stone was used as backfill for the new walls.