2012 has been a busy year for Stone Inspired.

We have been lucky to have worked with many wonderful clients who have involved us in their garden projects.  Of the 20 jobs we were involved in, 18 were for private clients, and the only exception being the small bit of stonework we built for the Macmillan Cancer showgarden at Gardening in Scotland; and the Jubilee bench for Clackmannanshire Council.

Private clients are key to our business, and I look forward to working with more clients in 2013.

Here are the jobs that filled the first half of my year. 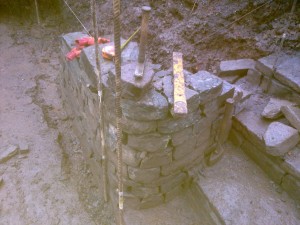 Retaining wall and steps and mud

Thankfully the snow stayed away for most of the winter 2011/2012.  Unfortunately the mud didn’t!  We worked on phase I of this job in Larkhall, building the first set of two steps and retaining walls.  We came back in the Summer to complete the job – see part 2 of the Review of 2012. 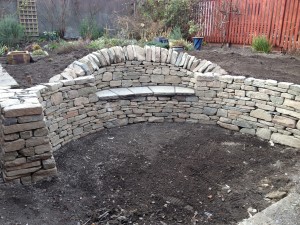 The centre-piece of this job was the curved bench in the middle of the retaining walls.  The clients were very involved in the design and build, moving all of the stone for me and keeping me in coffee. 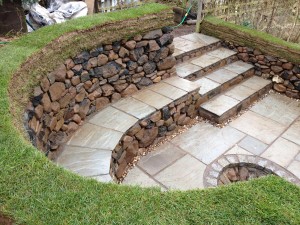 A seating area made from local whinstone in the Scottish Borders.  We were using a quite random and very hard stone which made building the cheek-ends and curves a bit more of a challenge!  We built our first fire-pit on this job too.

Thanks to Steve Robison for laying the paving. 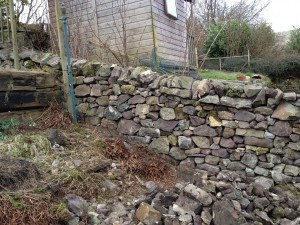 A repair and rebuild job in Carlops south of Edinburgh. This was a prelude to a bigger job for the same client. I became pretty familiar with the random whinstone as I ended up using a lot of it this year! 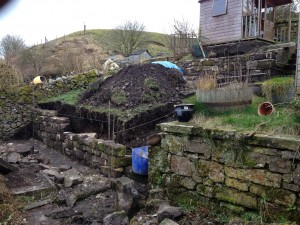 Whilst working for the neighbour above, we were asked to repair the wall next door! So, we jumped over the wall we’d just repaired, and took down and rebuilt this old mortared wall. 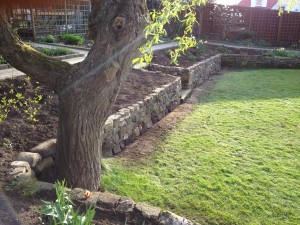 Edinburgh – low wall repair and rebuild
This pleasant little job involved taking down and rebuilding two low retaining walls in this Edinburgh garden. The stone was limited in supply, and so I asked the client to ask her neighbours for more stone. She produced about another two tonnes! It’s amazing what you can find in other people’s gardens. 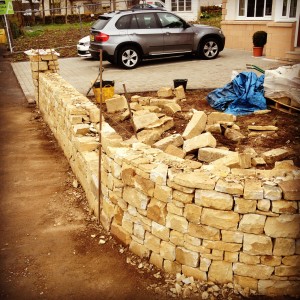 Fife – Boundary wall
This job saw some amazingly hot weather – it was the end of March and I spent most of the first week on the job in my shorts and t-shirt – we had a very unseasonal heatwave. On 3rd April, the weather got back to normal – it snowed! 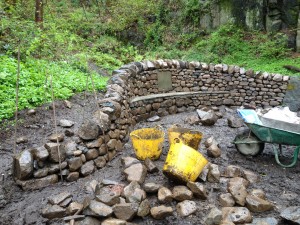 Alva Glen – Queen’s Diamond Jubilee Bench.
We were commissioned by Clackmannanshire Council and the Alva Glen Heritage Trust to build this dry stone bench as part of the Queen’s Diamond Jubilee celebrations. This was an interesting project as I don’t tend to build works that are accessible to the public. We were specifically requested to make sure that the bench was vandal-proof, and that required the use of mortar to secure the copes. I don’t like using mortar, or as I call it, the Devil’s cream. More disappointing though was the planned royal opening didn’t happen in the end. Oh, well, maybe next time. 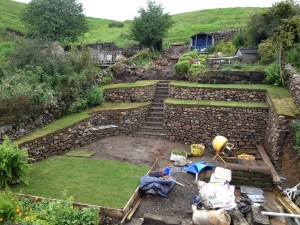 Carlops – dry stone retaining walls and steps
We returned to Carlops to put in place this tall retaining wall as part of the client’s plan to build an extension to his house. He needed a huge chunk of his garden dug out, leaving a large steep slope that had to be retained. In all the two retaining walls stood 2.5m tall. A staircase was required and we put in a bench too. All built with more of that difficult whinstone! 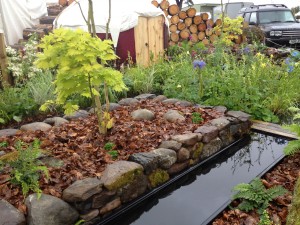 Gardening Scotland
We worked on a show-garden at Gardening Scotland for the first time. We were asked by Jayne Whitehead of Ivy Maud Design to build a wee bit of stonework on her Macmillan Cancer garden. Although we were a bit disappointed not to win a gold medal, we did win a silver gilt, and I personally found it an interesting process.