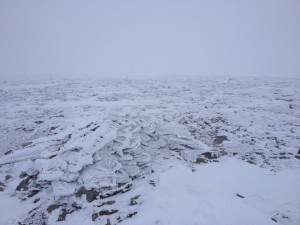 The top of Am Faochagach

Many Scottish hills and mountains have stone cairns on their summits. Most are rough piles of boulders made by the walkers and climbers who visit the tops to mark the highest point.

The Ordnance Survey constructed thousands of concrete pillars to be used as trig points to map the UK.

The image here is taken of the summit cairn on the Munro, Am Faochagach, just to the north of Inverness to Ullapool road. The hill is a fairly unassuming 954m high rounded lump of a hill. The rough pile of stones that marks the summit matches the style of the hill. 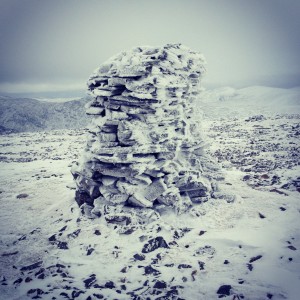 However, if you continue the walk NW for another kilometer, you come to this lovely circular cairn standing more than 2m tall on Meallan Ban. It’s clearly been constructed for a reason rather than as just a summit marker. The hill itself is on the northern flank of the main mountain ridge (100m lower than the main summit), and is even more indistinct than it’s anonymous higher neighbour.

The cairn itself must have taken some time to construct as it contains several tonnes of stone. Perhaps it was made as a marker point between two estates? Certainly the nearby mountain of Beinn Dearg (see below) has a stunning dry stone wall that runs for miles across it’s summit and down one long ridge. 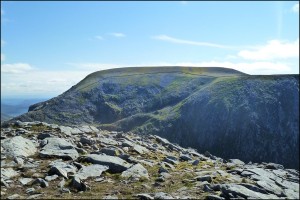 Highland lairds have a habit of building some fairly obscure stone boundaries on hills. The “famine” wall on Beinn Dearg is amazing, but the effort to make it would have been astronomical. Made in the 1840’s by starving crofters, it is a sad reminder of the plight of the many people who built it; and of the power of the laird who made them do it.

Beinn Dearg is more than 1000m high, and takes 3 hours to get to the summit. If you were building the famine wall, you either had to live up on the mountain or else have a long walk to work every day! The weather is not always as sunny as it is in the picture.  However, when you essentially have slave labour, it’s amazing what can be achieved. I wonder how sad many of these people really were to be cleared off their land and sent to the New World, or else migrated to Lowland Scotland.