Life is like a box of chocolates – you just never know what you’re going to get. It’s one of the fun aspects of working for yourself – you never know what work enquiries are going to come your way. This year has been a real mixed bag of big projects and small jobs; some were simple stone in/build/move-on whereas a couple were definitely organisationally challenging projects. 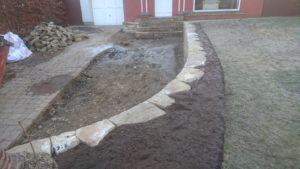 Edinburgh – January
I don’t often get further work from previous clients as I’ve usually spent all their money and built everything that can be built in their gardens, so it was nice to come back to work on the front garden of a property in Edinburgh. I’d worked for the clients in their back garden in 2010. This time I was remodeling their front drive, starting the job in Mid-December 2016 and completed it early in the New Year.

Lanark – January & February
After my small diversion to Edinburgh, I went back to finish the job near to Lanark that I had started in the autumn of 2016. Thanks to a very patient client, I had been able to fit other jobs and a trip to the USA into the build programme. 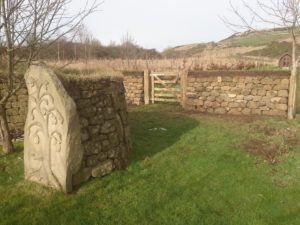 Collessie, Fife – February
Despite what I said about seldom working for the same clients, February saw me back in Collessie in Fife building a pair of small walls for my favourite client. I’ve been working on his property on and off for years. 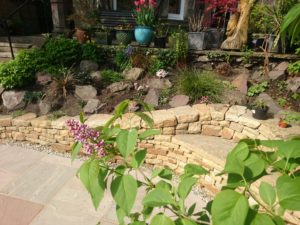 Eskbank – February & March
March saw me in Eskbank. I had picked up this job working for their neighbours the previous autumn. This was another small job – a low retaining wall and a bench. All good fun and nice and easy. 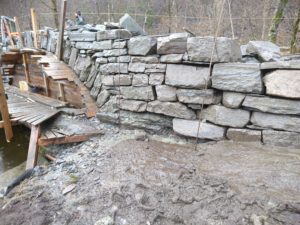 Norway – March
In March I spent a week in Western Norway volunteering on a dry stone bridge building project for Haaken Aase, a Norwegian waller I met through Facebook. The stone was gneiss which is both very dense and hard to work. The bridge also required that the pieces were huge, so most had to be manoeuvred into place with an excavator. It was all very slow going and the late winter wet and sleety weather made for a trying worksite. Still, it was fun spending time in Norway and working with local wallers. 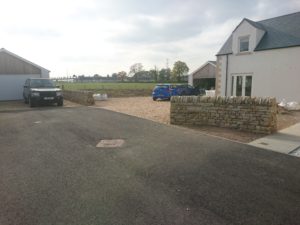 Letham – March & April
The rest of March and into late April were spent building two small free-standing walls on a new build property near Falkirk. It was another pretty straight-forward job using Alston stone. The neighbours made things more difficult than was needed by constantly parking their big campervan or one of their several cars right beside where I was working. They kept making unhappy noises about stone chips damaging their vehicles but would always complain about having to move them. I was trying to be a nice tradesman and asked them not to park too close but it seemed like they wanted the damage so they could moan. I was glad to finish and move on to the next one! 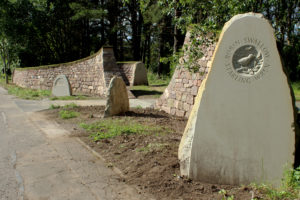 Newton Mearns – May & June
No sooner had I finished in Letham than I launched into a big job for East Renfrewshire Council in Newton Mearns. This project had been gestating for several months after I won a commission to design and build a dry stone gate entrance to a new path.

The original brief had talked about pillars but I pushed the envelope and came up with a design that incorporated two quarter circle wall ends 2.2m high, with a curved bench, stone carvings and a turf top. I chose a reclaimed building stone from Perthshire that I knew was chunky and would be good to build with. The turf top was an aesthetic feature and also hopefully more vandal proof than stone copes.

The stone had all to be cropped, sorted and bagged – time-consuming and labourious. Meanwhile the work site required heras security fencing, chains and locks and a small container for keeping tools in. It was like a proper building site!

There was a tight deadline with an opening date set for the end of June. I don’t really like working to deadlines but sometimes you have to just get on with it. I had Danny Woodward working with me for most of the build time – it couldn’t have been done on my own. In all it took us seven weeks to complete.

I’m very proud of the job. I love the way the design turned out and the client and most of the local residents were very pleased with it. However, I came away thoroughly sickened with dry stone walling. The job was done for a fixed budget and inevitably over-ran both time and materials, the costs of which I had to suck up. There was a lot of extra time spent talking to the public, dealing with difficult Council sub-contractors and general faff. Whatever contingency I had built in soon disappeared. Everyone else got paid, so my share diminished to the extent that it was really not worth doing financially. I love my job but its got to pay.

The lack of good wallers in Scotland is chronic. This has been a constant theme for many years. The Newton Mearns job just reinforced that. There really just aren’t enough good wallers (the good ones are all busy and to be honest too expensive to employ and make a buck out of) and there are just no young or novice wallers looking to learn. I’m happy to take on small jobs for myself, particularly with private clients where the deadline is a bit flexible. But big commissions with a definite deadline can only be undertaken with help, and that involves paying for the skilled guys. I loved the challenge of the design for the Newton Mearns job – it was definitely a fun project to design and build but the associated stress and costs made it a pretty miserable time. I keep telling myself that I can’t take on big jobs.

Edinburgh – July to October
I came away from the Newton Mearns job with a resolution that I wanted to get out of the business. I was physically hurting and mentally tired. Carrying on doing the same shit, year after year was not a happy prospect.

So after a holiday and time away from the job, what did I do, but get stuck into another complicated job… Do I ever learn? However, this one fulfilled my criteria of being interesting. Again I designed the job – this time a seating area in the corner of the garden of this Edinburgh house. The Hutton stone and black limestone paving worked well together. And the pizza oven works well. 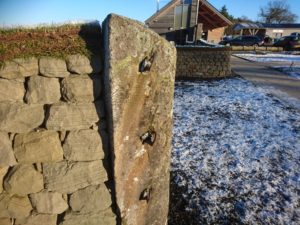 Edinburgh and Falkirk – October to December
Along the way this year, I was asked to do some work on a film set for a Netflix production. Through various permutations and changes, I eventually was commissioned to build two animal pens, a small wall and a well on a set in Edinburgh. It was all good fun, long days and hard work but in a totally new work environment – definitely an experience I would like to do more of.

Back to reality, I also built a bench and two sets of steps for a friend in Dalkeith. A nice wee job again.

The final job of the year was for the Callendar Estate in Falkirk, building a dry stone wall for a new information area about the Battle of Falkirk Muir in 1746.

I’m casting the net wide to find a new direction. I have one idea for an alternative income source that may or may not work out. It’ll take time to get off the ground and will most likely supplement my stone work income rather than replace it. At first at least. Over time, who knows?

In the meantime, I’ll carry on stone walling as I need to earn a living. I’m resigned to working pretty much alone for the next few months. I still enjoy the design and building aspects of dry stone walling, but I’ve never been able to solve the problem of a lack of workers that can both do the job to a satisfactory standard and allow me to make a profit. So I guess I’m going to me much more selective about the projects that I take on – anything that requires extra workers; lots of travel; a definite budget; a deadline and pretty much any other complicating factor is a big fat no!