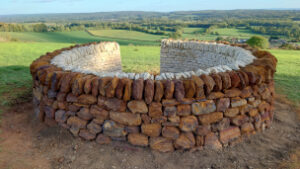 I was asked to build the stonework by the designers Trish Evans and Nick Humphreys from Instar.

The work was commissioned by Surrey Hills Arts as one the permanent exhibits for their Inspiring View programme. Inspiring views is a series of permanent works of art – Coccolith is the latest. 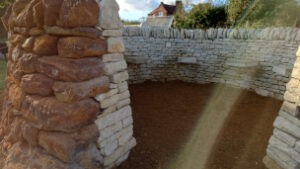 The concept of the piece was to create a visual representation of the underlying rock – chalk – the organisms that formed, the microscopic planktons called coccoliths.

Chalk for building proved hard to source.  The building version is called Clunch. The only surviving working clunch quarry was not in a position to provide stone for the project. Instead we opted for the Somerset White Lias as a substitute, supplied by Lovell Stone Group is also created by the same process as clunch. 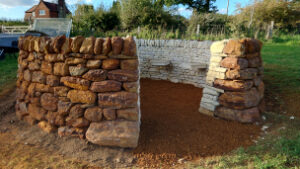 We also used local Ironstone from the Moorhouse Sandpits quarry which is owned by the Titsey estate and is situation a couple of miles and well seen from the Coccolith site.

The viewpoint measured a 1.5m radius inside, 2.25m to the outside; approx 10m long and 1.2m tall.  A double row of cope stones allowed a narrow planting strip for wild flowers.

In all the stone work took 20 days to build from setting out to site preparation, sorting the stone, building and tidying up.  18 tonnes of stone were used. 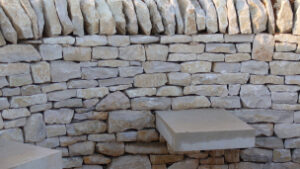 Five sawn sandstone bench cantilever 450mm out of the internal face of the wall.

Each of the bench pieces a coccolith design laser cut into it. Each bench stone was one word of the phrase “Built Upon Tide and Tide”.

The floor is finished with gravel/sand mix from Moorhouse Sand. 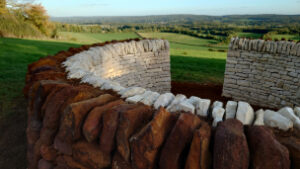 Coccolith is situated just off the North Downs Way, a 153 mile route that runs from Farnham in Surrey to Dover in Kent.

The location of the viewpoint is on a hillside at Clarks Lane Farm at Tatsfield, Surrey and is on the Titsey estate.

The views from Coccolith look South East and South over the Surrey and Kent countryside.

Nearby to the viewpoint is the new Titsey brewery.