Hirta and Boreray in the distance

Euan Thompson (aka the stone dyker)  and I spent 10 days on St Kilda this July working with the National Trust for Scotland on several dry stone walling and stone structure repairs.

St Kilda is a small archipelago about 40 miles west of the Outer Hebrides. The main island Hirta was been inhabited continuously for more than 2000 years, but the last St Kildans were evacuated to mainland Scotland in 1930. Since 1955 when the military radar station was set up, St Kilda has hosted a small population of MoD personnel, NTS workers and volunteers, day tourists and hundreds of feral Soay sheep!

St Kilda was awarded UNESCO World Heritage status in 1986 for it’s cultural natural qualities, one of only 39 worldwide. 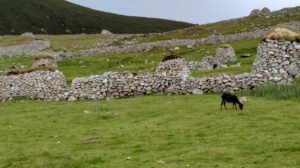 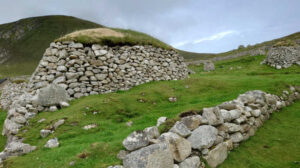 For the dry stone waller, St Kilda is a treasure trove.

There are endless amounts of granite and dolerite, and the residents used the stone skilfully to create idiosyncratic blackhouses, cleits (storage buildings with corbelled internal walls; unique to St Kilda) and boundary walls. They built in what we called the “St Kildan style”.

We arrived thinking that we would be rebuilding walls in this somewhat random style. However, we were quickly disabused of this notion.

Instead we spent an intriguing time working from photographs to rebuild “stone for stone”. 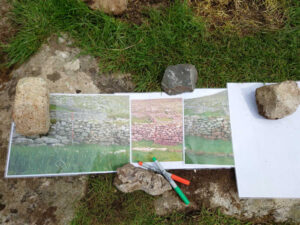 Laminated photos of a section to be rebuilt

Working with the archaeologist

Virtually every stone structure on Hirta has been photographed, catalogued and recorded.

Clare Henderson, the archaeologist, produced laminated images of three cleits, a blackhouse wall and stone structure no.43 needing small repairs. This amounted to no more than 14m2 of repairs.

After a couple of days working out what to do, our process for working was like this: 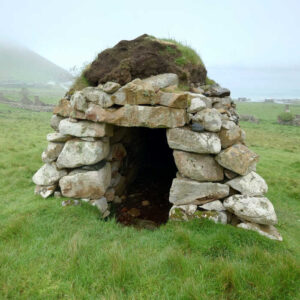 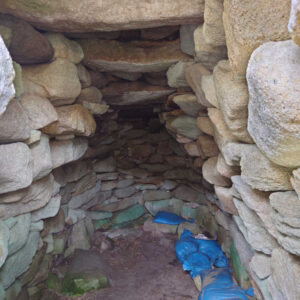 We discovered that with the cleits and blackhouse walls that foundations had shifted and the stonework we were tying into had moved. So although we could identify small sections or patterns of stone for the rebuild, they seldom went back together the way the picture showed.

We started off trying to achieve 100% perfection but that was quickly downgraded to 70 or even 60% with various parts rebuild in the local style with stone we couldn’t identify.

On one of the cleits, Euan and I worked efficiently in the morning to identify and lay out most of the stones from a collapse. The afternoon was hugely frustrating as Euan, Clare and I struggled to get the stones to fit together. We went home pretty much defeated. The next morning we came out and tried again. With a fresh look the wall went up quickly.

We were rarely physically challenged by the work but our brains were always tired at the end of the day! 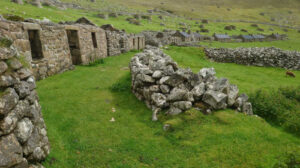 There are more than 180 repairs to be done – some just a few stones to go back on and one like cleit no.85 – Lady Grange’s cleit – a hugely complex rebuild involving scaffolding, acrow props and a lot of planning.

All in all it’s an incredibly slow process but one that is deemed worthwhile by the NTS, and we are now able to add the title “expert forensic dry stone wallers” to our CVs!

If anyone is interested in further information about St Kilda or the dry stone walling work, get in touch with Susan Bain via email at SBain@nts.org.uk.

And finally the St Kilda Rangers Instagram page is worth following too.