Jane Porter, a Garden Designer from Bristol, first got in touch with me in January of this year to ask if I was interested in getting involved with a garden installation at the Chelsea Flower show in 2023. I’ve never had the opportunity to build at Chelsea before and jumped at the chance.  It had been a bucket-list thing for me, and I was pleased to have been asked. 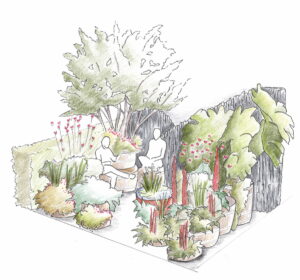 She called me again a week later to say that she’d been offered a small garden space at THIS year’s Chelsea Flower Show too – all very last minute and so was I interested in doing that build too.  We only had 3 1/2 months to put it all together!  I said yes of course!

The design for 2022 required a stone backdrop of vertically laid stones.  The verticals were to recreate the many harbours of the west coast of Scotland which are built this way.  And the final detail was to build the stone work so it looked like two converging hills seen from a distance.

The initial thoughts on stone was paddlestones but I quickly discounted this as too small and too slow to build.

After wracking my brain I remembered that Fife-based slate sculptor James Parker had made a video of a defunct quarry in Perthshire. Calls were made and a site visit arranged with the estate manager, Philip Blount at Logiealmond. I drove to meet Philip and he showed me around the old quarry.  For a stone worker it was like some sort of paradise! Tens of thousands of tonnes of slate just waiting to be picked. 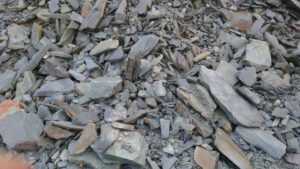 I took some pics and a couple of videos and excitedly fired them off to Jane. She was ecstatic – we’d found our stone!

A few days later, I was back at the quarry with local waller Martin Tyler and we set about picking the stone we needed.

I had reckoned on six tonnes but rather than guess the amount I marked out a 4m by 2.5m rectangle on the ground to represent the space we’d be building on, and started laying out the stone edge up to replicate the look of the finished wall. 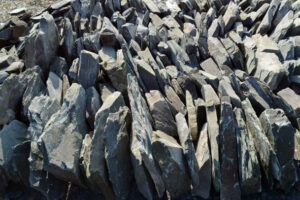 After a couple of hours we’d completed the task. There was so much choice that Martin and I were almost overwhelmed with the selection.  Whenever we saw a “perfect” stone there was always another three even better pieces!

The Logiealmond guys most generously donated the stone to Jane and also offered to bag and palletise the stone.

Finally in Mid-May I went down to London with Euan Thompson aka the Stone Dyker to build the walls. Palletline had delivered the stone a few days earlier, and the festival’s landscapers, Big Fish Landscaping had prepared the area and built a rendered block wall for us to build against. 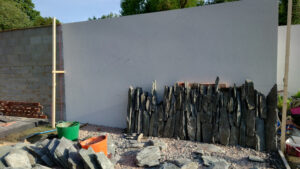 It’s not until you actually get on-site that you start to realise what you have to do. The design seemed simple enough – build a large section of vertically placed stone work with mortar backing.  I had purposely selected a couple of tall and deep stones to act as bookends for the wall. We had set up a-frames at either end to give us a profile to work to and were building off the compacted gravel floor.

The biggest stone was placed at one end and then we started buiding, fitting a couple of smaller stones then a big one to give a jagged tooth feel.  After building a couple of meters of foundation course, we began to fill in the gaps and raise the height of the wall.  The slate is quite friable, so hammering and dressing with brick hammers was kept to an absolute minimum.

The first day had been about getting started, unpacking the bags, talking about the design, sorting out sand, cement, water and the mixer and so it took us nearly four hours to lay the first stone. We worked in the sun until 7ish, and went to the Rose and Crown for a beer or two.  It was a long day! 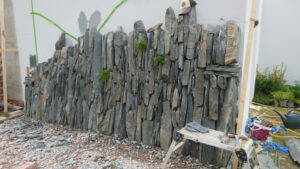 Day 2 started with me spending a long time wondering how I was going to build the second course to continue the vertical look but without compromising the strength.

We were using many brick ties to secure the stonework to the blockwork, but the ends needed to be built vertically to hide the rendered wall.

Think trying to stack three of four motorbikes one on top of the other!

In a normal wall, the stone is laid flat so the surface area provides a base for building the next course on top. Joins are covered with the subsequent layer of stone, and this friction and weight is what gives the dry stone wall its strength.

Vertically laid is entirely different.  It’s basically just balancing stones on top of each other.

Once you have a section built it feels strong. The end stones have only one plane touching another stone – and standing vertically always felt like they wanting to topple over.  In the end I decided we needed to build a short horizontal section, well-mortared together in order to give a stable platform for the next vertical lift. Once the mortar was set, the whole structure would be solid and strong, but it was a constant worry whilst building it! 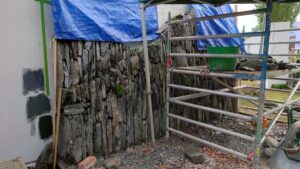 Day 2 had been gloriously sunny and was a great day for working.

Day 3 started grey and became very wet.  We were getting on with the build and were hopeful of getting done by the end of the day.

The rain didn’t help and was slowing us down. We had a pop-up shelter to work under, so we were at least sort of dry. By the middle of the day we had scaffolding up too, and the working conditions were getting a bit more difficult. 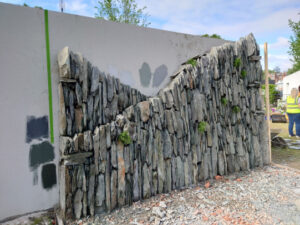 We got close to finishing but not quite.  So Euan and I were back for a quick couple of hours on the Monday before getting our train home at 11am.

We got the wall finished with an hour or so to spare. 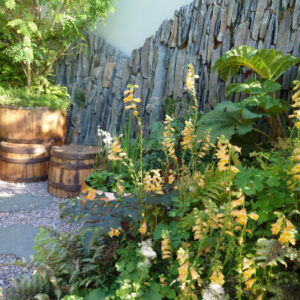 Jane and her team of planters along with Alec Stevens who built the containers from whisky casks, had four days to put the planting together and finish the garden.

Friday evening was the deadline, before judging took place over the weekend. They did an amazing job! The images that she sent me were incredible.

Monday was press day with celebrities and royalty in attendance.

On Tuesday Royal Horticulture Society members were given two days of members only access.

The rest of the week and Saturday were open days for the public.

But first up on Tuesday morning was the medals announcements. This is the moment that all the designers wait for! 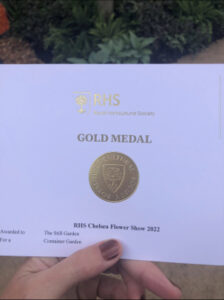 The Still Garden was awarded a Gold Medal, which is the highest accolade at the Chelsea.

It was an outstanding achievement for a first time designer building a garden at Chelsea.

Later that day it was also awarded the Best Balcony and Container garden – another amazing accolade give the quality of the gardens at the show.

Over the course of the next few days the garden and the stone work were greatly admired.

I went to visit on Friday and it was great to hear all the compliments about the slate wall that Euan and I had built.

It was quite an experience in the end – the Chelsea Flower Show involves a huge amount of work from all involved. The hours are long and there is a level of stress to get things done on schedule. We had a great team and of course fantastic support from the Logiealmond estate. 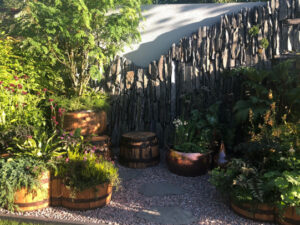